This was to be a mix of a dozen or so live tracks covering about thirty years of shows and about twenty minutes of the inane chatter the band was known for (between songs). As the number of tracks increased, the amount of goofiness shrunk until there are now just a few disjointed comments. There is probably enough for you to get the idea anyway.

The songs progress more or less chronologically, from 1978 up to the final CBs show in 2006. This allows the listener to follow the musical and personality changes the band went through.

This cd is the third leg of the "Wasted Life" trilogy; and it comes before the release of part II. That's probably because most of what will be on any part II is already available. The premise of this project was as I mentioned before to give the audience a sense of the playful and often stupid banter the band engaged in and to offer versions of songs that were not yet available in their studio versions. Many of these songs were in fact never recorded except at live shows; no studio versions exist.

If you've read Christopher's review of "A WASTED LIFE...PART 1"; you'll remember his comment that the general opinion of the Clams was that they were just a "Bar Band". He was surprised at the amount and quality of their studio work. This recording re-enforces that misconception; presenting the boys as a classic "club" band. That is as true as the idea of the band sitting in a studio piecing together songs.

The Clams early on fell into the habit of recording gigs. There were several reasons for this. It's fun to listen to yourself; they were prolific to the point that songs were being forgotten; and they would sort of "game film" the tapes for ideas of what worked and what didn't. Most often they were taped right off the board; so that the vocals appear louder than they were, and you lose the un-miked stage sounds. This also can make the audience seem distant or smaller (although sometimes it was very small).

These recordings were not meant for release at the time. Hilly had recorded a few live songs for release and they were done much more carefully. This cd is more of a notepad, a sketch-book of ideas and moments.

By the time it was finished; there were twenty tracks, eighteen songs, on the cd (two songs have more than one performance).

From one of the band's first CBGB performances, this innocent, essentially pop music, piece was used by the band as an introduction, an opening song. Most of the small jaded east village crowd in 1978 hadn't seen anything quite like "THE PETS" before.

Another example of how popish the early "PETS" were. This song remained a staple of the set until late 1980 when the more sophisticated material that would become the Handshake record began to dominate the list.

Gary's mumbling at the end of this song allows us to date it. He's imitating Al who was imitating Pope John Paul earlier in the set. (Al came out as usual in his bathrobe, now worn like a papal garment, and did a very good impersonation of the Pope's speech at Yankee Stadium). That would have been Oct. 4th or 5th, or maybe the 6th, 1979, during the Pope's visit to New York.

One of the best of the early songs; the band was still playing this after "THE PET CLAMS " was released and playing on the radio. It probably would have been included on the follow up. When Dave left the band it was dropped from the set list. This is what I mean when I say the guys could play reggae.

I have a separate page on this song elsewhere on the site, look it up.

The song that caught Hilly's attention and started the band down the "wasted life" road; this could be any night at CBs from 1978-1980. From the "My Sharona" intro I'd say 1980. Gelb actually says "I don't know why I bother to turn around." Much of the banter I've mentioned was directed at him.

"JOHNNY PANIC AND THE BIBLE OF DREAMS"

A very powerful song, a strong performance, uneven recording quality. I have a mp3 of this same performance on the "trinkets" page that in some ways is better. This is probably late 1979-early 1980. Oddly, the band only played this song a couple of times and never did a good studio recording of it. The jam session (cream-like) that ends the song shows how much better these Jersey trained musicians were compared to their Long Island counter-parts. Just listen to Dave and Al.

A sort of "American Pie" lyric...This is a very structured arrangement. Notice the interplay of guitar, bass, drums, and yes Gelb's Piano. It's strange that a song worked out so tightly was never done in the studio. Maybe because this tape was good enough to showcase it without re-recording it. Also Gary has mentioned to me some problems with the lyric...(but then he showed me how he would re-write it to work). I don't know sometimes.

Also called "YOUNG AMERICAN" or just "CAMBODIANS". This would be 1980. Probably recorded on a Sunday night in a mostly empty club. A New York Times reporter once asked Richie "There's a lot of satire in your lyrics." To which Gelb pointed to very drunk Gary and said "He writes the lyrics." Gary's reply was "Whaz satire?" This is the kind of song that gave the band it's Bar Band reputation. For every "THE LOVE" there was an "ASSHOLES" or "CAMBODIANS". And what are you going to remember... "Wait for tomorrow" or "Assholes where ever I go!"? Gary was going to put a version of "ASSHOLES" on the cd but ran out of room on the disk. He'll probably dump it off to me and the site. Our gain? In defense of "ASSHOLES" there are a lot of fifty-something people in the New York-New Jersey area who only know the Clams as the "ASSHOLE" band.

This is the last track Dave plays on for about eleven years. New Years 1981, he would leave the band in June. One of their better songs, it was bumped from the album (after a basic track was done) by "Generations". This has been viewed ever since by the band as an error. So much so that there was sentiment to include it on the 30th anniversary edition.

The band now has a new guitar player... John Fernandez; and a new keyboard player, Jim Beringer. This is the only live performance of this song; it was only played once. They had recorded it for Hilly in the afternoon, played it that night, and moved on to other songs. 1981, Pet Clams now, on the radio etc. Handshake has not yet folded. Gelb blows the lyric in the 3rd verse. It's supposed to be "Mindlessly moment by moment we become more and more helpless." He actually sings something like "All the trees(dreams?) awaken and leave us so helpless."

"WHAT DO THE FASCISTS HAVE TO DO WITH ROCK AND ROLL MUSIC?"

Another "TEN SONG TAPE" song. Gelb starts this by proclaiming "Rock and Roll has been Good to us!" as Gary would say "Whaz satire?"

"RUN AWAY AND HIDE"

A great song, but so filled with profanity that at the time no one wanted anything to do with it. October 1981 or '82. (Gelb mentions daylight savings time) There is a CBGB studio version of this tune, and this live version and that's it. Great lyric! "In that great war movie (Vietnam) I could've had a part but I told my agent "Pass"..."What a tv show it will be the story of my life you can gladly have the rights...and I've already started the first re-write"... "A fifties film where they drop the big black bomb... the pilot hears the voice of God upon the intercom saying Run Away And Hide"...

"I WANT THAT GIRL"

New band; Gary on lead, Mike Graf on bass, Larry Mandel on keys, Ken Widis on 2nd guitar and vocals, Phil Attardo on drums (and vocals). By now Handshake has folded, Hilly has lost interest over a squabble with the now fired Al, and MTV permeates the world of rock. A new more synthesized electronic sound. Still a good night at CBGB. This would be summer of "83? (best guess)

Same band (same show?). The band is obviously embracing the digital revolution that would eventually allow them to make their own studios and so...recordings. By 1984 Kenny had gone, and by 1985 the band was no longer playing live.

1992, the band returns to CBGB, Dave Anderson has returned to the band. Graf, Brian Buckelew, and Mario, round out the players here. As Gary and Richie finished the soon to be released "THE STORY OF MY LIFE"; Dave Anderson's interest in the music was renewed. This led to the band playing out again for the better part of the 1990s. In many ways this was the best version of the band ever, but these tracks don't really show it. Since they now had access to studios on several different levels, they were less concerned about live recordings. This is like the second live gig in seven years.(the first was at the Brighton in Long Branch, with Damian on drums) See the"THE STORY OF MY LIFE" page.

One of two tracks recorded at the Fast Lane in Asbury Park in Dec. of 1993. Terri Thatcher has been added to the line-up to sing harmony. The Fast Lane had been a second home for the band since they were thrown out of the Stone Pony in 1978. If not for CBs it would have been considered their base. These two tracks were not recorded "off the board" but with an early digital recorder placed in the back of the room. Because of this they are not "clean" recordings but contain the room and audience sounds as well as the sound coming off the stage. This is more of what it was like to risk your ears in front of Dave's amp. This gig can be dated by Gelb's injury. He fell off the stage and broke his foot. It was in the middle of one of the last "storms of the century", a big blizzard elsewhere, but an ice storm in Asbury Park. It actually blew the roof off the Fast Lane, and the band played on in the wind and rain (Yes! Really!) That explains Gelb's remark that there are only eleven people in the club. Nobody should have been out that night... but a gig's a gig. You can hear how sympathetic Gary is to Gelb's pain... he starts "God And Dr. Hawking", the next song. Charley Levinson ended up taking Gelb to the hospital at four in the morning. "Rock and roll has been very good to us!"

Probably the same night although it sounds like there are more people there.

Jump ahead a decade or so to the closing days of CBGB. Recorded off the board again; but now digitally, not to cassette tape. Dave was back in retirement. Chris Masi, and Jon Gelbstein replaced him. (See Gelbstein's Last Stand)

Same gig, you can hear the beginning of this song in the fade of the live version of "Hawking" on "O.L.P.B."

For you downloaders who want the graphics 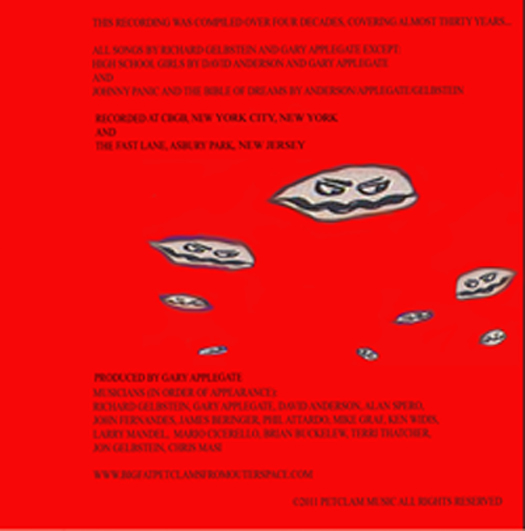 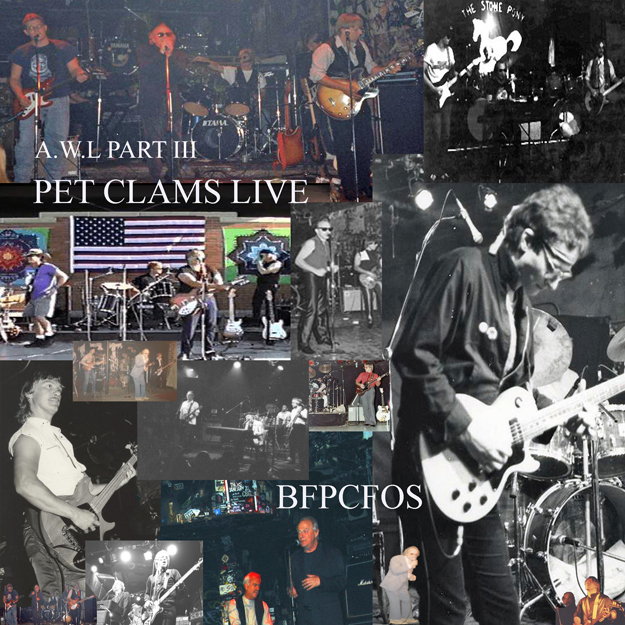